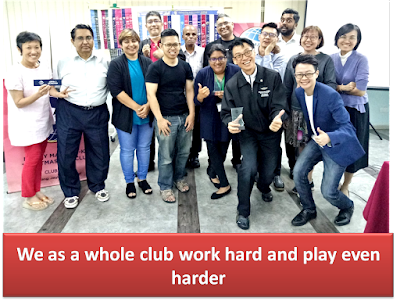 It was a quiet month end as the members were coming in one-by-one. Many Toastmasters had to wear multiple hats today. The meeting began slightly late as our Sergeant-At-Arms, Toastmaster of the Evening cum Table Topics™ Master, Manish Jha, IP1, called the meeting to order.
The theme was Work Hard, Play Hard and the word of the day was contentment. The President was contented to give her Presidential speech for the evening as our fellow members had worked very hard over the last 9 months and finally was recognised in the last District 102 Annual Conference for being a President’s Distinguished Club. All the members on the floor were happy to introduce themselves as well in the round of introduction. 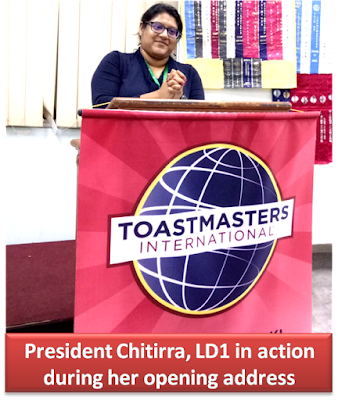 Manish Jha, IP1 then put on his Toastmaster of the Evening hat and briefed all on the history of Toastmasters and introduced the role players for the evening to explain their roles. Olivia Chen, PM1 was the Ah-Counter, Chitirra, LD1 was the Grammarian, Cetani Chen, ACS, ALB was the Timer while we had Shalini Taneja, ACB, CL from MAD Toastmasters as our General Evaluator. Following, he swapped hats once more to bring us through the Table Topics™ Session with a vast variety of topics. Every member who participated gave us a good takeaway message and feeling from their speech.

The entertaining project speeches session then began as Ken Chan, DTM being the first speaker slipped into the role of a boss giving a talk on Lean 5S to his employees with his title “Lean 5S”. Following, we had Rey Thean deliver her second speech on ‘Researching and Presenting’ with her title “What Drives Us To Do Something!” and she spoke about Maslow’s Law on Hierarchy. Finally from the Advanced Communication Manual we had Julia Leong, ACB, ALB do a speech on ‘Uplift The Spirit’ with her title “Integrity” and as her title spells it out, she spoke on the importance of integrity. 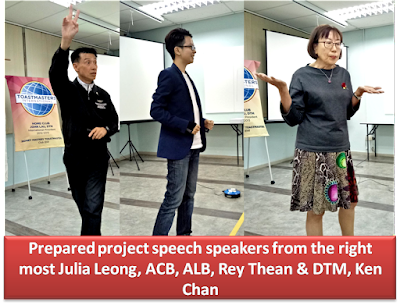 We had a very quick break session and we went on with the evaluation session led by Shalini Taneja, ACB, CL. First up was a very detailed Table Topics™ evaluation by Vijaykumar, CC. Later on the evaluations for the project speeches was done respectively by Srinivas K M, DTM on Ken Chan, DTM, followed by Kishan Pradip Doshi, DL3 on Rey and finally Ken Chan, DTM himself on Julia Leong, ACB, ALB. Their evaluations were critical yet convincing. 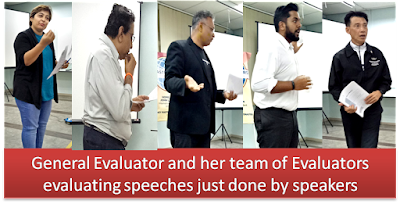 After a short open evaluation session, each technical role player gave their respective reports. ShaliniTaneja, ACB, CL then gave her critical heartfelt General Evaluator report to all. With that the best speakers were announced by our Toastmaster of the Evening, Manish Jha, IP1 as follows: 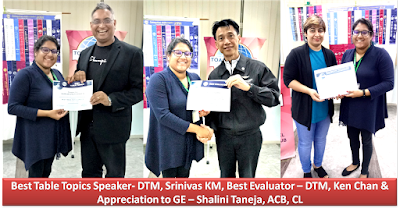 The floor was then passed back to the President who then gave an appreciation gift to the General Evaluator, received the guest’s feedback and made some announcements on the upcoming Annual Business Meeting. She then had a special segment to recognise the special award winners that received awards and appreciations during the last Annual Conference and over the term as follows: 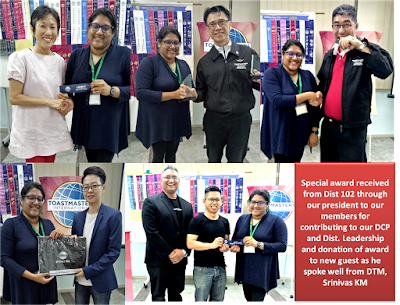 It was truly a proud moment where we worked hard and played harder over the weekend of the conference. Truly hard work pays off. It is now time to pass on the knowledge and skills to the next term of EXCOs when the decision is made at our Annual Business Meeting next.
Till we meet again, always remember, work hard, play hard, work smart, play harder. 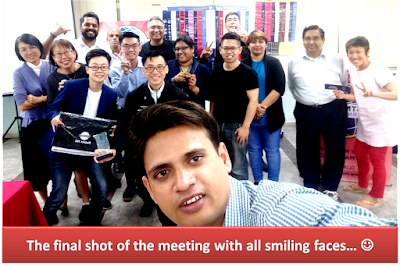 Posted by Money Mastery-KL Toastmasters Club at Sunday, May 19, 2019