Earlier before 6pm, organizing committee already arrived at the meeting venue for preparation. The meeting room was set up to auditorium mode for the contest to run well.


Contestants started showing up on time for the 6.30pm briefing, accompanied by 'eligibility and originality' check on their speeches.

After a short address by Sergeant-at-Arms, Victor Wan, ACB, CL, Club President Ken Chan, ACB, ALB was invited to give his opening address.

Chief Judge, Thiagarajah Nesan, ACS, ALB was ever ready at his seat for the contests to kick start.

In a contest, there are rules to observe. Rules to the contestants as well as rules to the audience were made clear. Without much delay, the Humorous Speech Contest 2012/2013 went started.

The 1st contestant, Kelvin Chong brought us with the story of married life in "The Mystery Of Life". He claimed himself experiencing all the 4 rings of life.

The 2nd contestant, Serena Kong, though suffering with severe sore throat, told us that "Life is Full of Test". She deliberately cracking joke of the condition she's experiencing.

The 3rd contestant, CP Lau, earned some laughter from the audience when the contest chair read his speech tittle, "Exercise to Lose Weight".

The 4th contestant, KL Loh, led us through the sweet and sour of his childhood in "My Father, My Dad", where his eye-catching probe, rotten, brought laughter to the room.

All the members and guest returned to their seats excitedly after refreshment for the 2nd contest, Evaluation Contest to start.

John Lim, CC from TARC Toastmasters Club was the test speaker of the contest.

While the Chief Judge and the Ballot Counters were busy deliberating the results, we took the opportunity to give away our appreciation to all the contestants and role players.

The much awaited result was finally revealed too. The club champion will walk away with our Hj. Naburi Cup. The result was as below.
1st Place: CP Lau
2nd Place: KL Loh
3rd Place: Serena Kong

Congratulations to the awesome winners, as well as the contestants who took part. The 1st and 2nd placing winners will also represent our club to take part in the Area G1 contest which will held on 22nd Sept.

It was a rewarding event for the contestants for they were given opportunity to gain contest experience. It was also rewarding to the club members and guest to learn by observing the more proficient speakers who have benefited from the Toastmasters training.

10th July 2012 seems like a normal Tuesday for folks in town, but members of Money Mastery-KL Toastmasters Club would beg to defer.

It was the 251st meeting since the club's establishment, and stood as the first meeting of the Term 2012/2013, where the new club officers will run the show since elected. 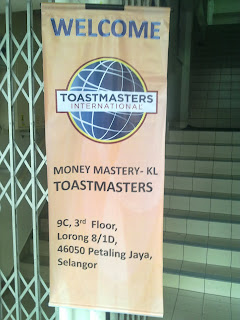 We saw the new banner stood firmly in front of the entrance to meeting venue to welcome the guest. Thanks to CC, Kelvin Chong to make the effort in getting the banner prepared for the club.

6.30pm, members and guest started to coming in to the meeting hall, and  as usual, the voluntarism in the members urge them to arrange the meeting venue to order.

The meeting started at 7.02pm, with TM, Ron Yeap calling the meeting to order, leading the members to read the Toastmasters promises.

Next, we welcome the Club President of the new term, ACB, ALB, Ken Chan delivering his first presidential speech. Ken, who is also the new Area G1 Governor, urge the members to have R.I.S.E and C.A.R.E. in mind.

We have Division G Governor, Thiagarajah Nesan, ACS, ALB as our General Evaluator. We have our first new member (Sunny Low) who has also witnessed the meeting.

Our inspiring speakers, thank you for your speeches, your sharing. It gave me very strong drive that I am starting to prepare for my speeches on the advanced manual.So, all members, start to book your speaking slots and lets share your experience with the rest. We want to learn from each other.

Sook Meng, Julia, KL Loh and many others, we missed your presentations.

Our seasoned evaluators. Thanks for your comments and I am sure our speakers have learned tremendously. I look forward to listening much improved speeches in our coming meeting.

Thanks to Serena Kong, as our Table Topics Master. A very kind of her has given out a small token to all  Table Topics participants. Very cute key chains indeed.


Towards the end of the meeting, a special arrangement was made. We wish our club a happy birthday, we cheered for it's remarkable 10 solid years of establishment.

The coming meeting on 24 July 2012 will be our Humorous Speech & Evaluation Contests.