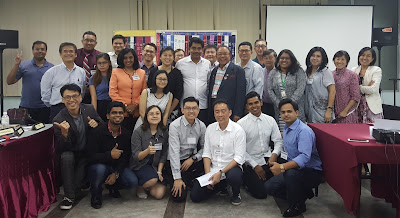 Today’s meeting was kick started by our Sergeant At Arms EK Yeo, CC, CL who called for the meeting to order at 7.15pm. He swiftly guided us through the house rules, Toastmasters’ Promise and invited me to give my presidential address.

It’s been 3 months since I became the President of this club. In the last 3 months, I made some mistakes. But I am fortunate that with the guidance from the senior members, I managed to embrace the mess and from that, out came the theme for today’s meeting – Embrace The Mess.

After that, the Grammarian Mathew Philippose, CC, ALB introduced the word of the day which was “mettle”.

I invited the members & guests to introduce themselves to the meeting. They also recited what the theme meant to them and used the word of the day.

After a very upbeat session of passing the baton to allow each attendant to speak, I invited our Immediate Past President Ron Yeap, ACB, CL to give a Ron's-Style of humour as a Humour Master. Everyone enjoyed the session and laughed a lot.

After the humour session, the meeting was handed over to the first time Toastmaster of the Evening, Dato' Dr. Mary. Although it was her first time in this role, she came prepared and handled the situationsensibly. For the benefits of the first-time guests, she introduced the Toastmasters’ history and club's history with pride. 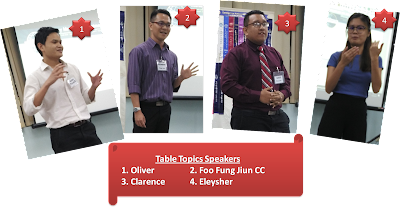 Then we moved on to the mysterious, mind-cracking and motivating Table Topics session with Srikant also taking the role as our Table Topics Master for the first time. He popped great questions on leadership to all those who attempted the session. Most of our guests showed the mettle to accept the challenge and the rest enjoyed their presentations.

Next, we were into another interesting part of the meeting-Assigned speech session. Our 1st speaker, Shain Anand was delivering his CC Project 3 with the title “Dealing with Suckers”. The story was about the blood sucking mosquitoes and his tips on dealing them with 4Bs -Banish, Bloom, Build and Bait. He was confident, with a calm voice and joyful facial expressions.

Our 2nd speaker was Joel, delivering CC Project 7. He started the speech entitled “Opportunity in the east" by asking questions and pulled the audience into his story. He is good in conversational style of speeches. 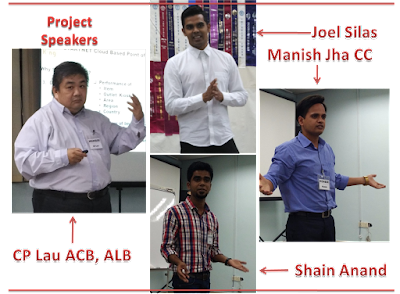 The 3rd speaker was Manish Jha, CC delivering Pathway Level 1, Project 2 and his speech title was “What I’ve”. Manish shared an instance from his personal life and gave a message that we should treasure what we have instead of looking forward to what we don’t have.

The final speech of the Assigned Speech Session was done by CP Lau, ACB, ALB delivering from The Advanced Communication Series, Project 4 and his speech title was“Standardize to Synchronize”.His speech was about a presentation being given in front of the Board Members of a company about upgrading their IT infrastructure. The speech had a Q&A session also.
A break of 10 full minutes was taken as we were on schedule.

Then the General Evaluator, Samuel Selvaraju, DTM took over the Evaluation session and put his team of evaluators into action. 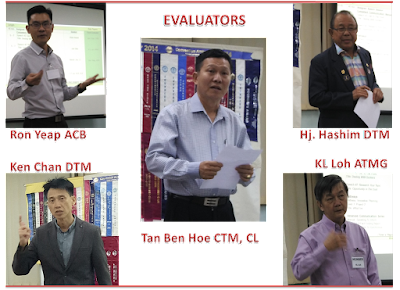 Ben Hoe, CTM,CL was our Table Topics evaluator. As usual, he was very positive in his feedback to all the Table Topics speakers as well as supportive in sharing their areas of improvement.
After that we hadour Assigned Speech Evaluators Ken Chan DTM, KL Loh ATMG, Ron Yeap  ACB and Hj Hashim DTM, who gave such comprehensive and concise evaluations forour 4 Speakers.

Congratulations to our winners: 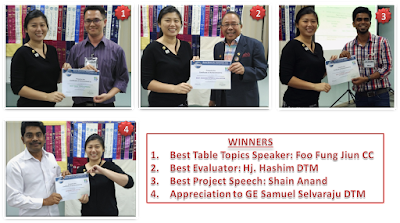 Tonight’s theme taught us to embrace the mess. But in order to clear the mess, it takes courage and humility to correct the situation and to come out of the mess. That is the spirit to call for embracing the mess.

We had a total of 6 guests for our meeting tonight. Before the meeting ended, we invite our guests to provide their thoughts and feedback.

We look forward to meet everyone again in the next meeting, gracious! And of course, as usual, we had our group photo before the end of the meeting. Say cheese!

Meeting # 391 – Unleash the Power Within 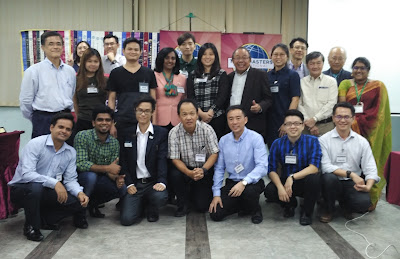 The upcoming Leadership workshop at MMKL was soon to come and thus it stirred us to have a meeting that would be a catalyst to our attendants to sign up for it. Unleash the Power Within was the theme of the meeting inspired by non-other than the world’s number one motivational coach, Anthony Robbins.

Our Sergeant At Arms was E K Yeo, CC, CL who called for the meeting to order at 7.15pm promptly as always. He swiftly guided us through the house rules, Toastmasters’ Promise and invited the President on to give her presidential address.

Wendy was in sync with the theme both mentally and physically with her well prepped opening address highlighting leadership. She then invited the Grammarian to introduce the word of the day which was “endeavour”. To endeavour is to strive at accomplishing a goal. To be constantly hopeful in times of discomfort. To most definitely unleash the power within. And with that, every member and guest shared their thoughts and hopes in what inspires them to climb the ladder of success in leadership and how they had grown as individuals by unleashing their truest potentials.

After a very upbeat session of passing the baton to allow each attendant to speak, we were all ears for an invocation speak by one of MMKL’s experienced Toastmaster. K L Loh, ATMG, delivered his heart felt invocation speech based on the theme.


Our Toastmaster of the Evening, Kevin Khoo, CC took stage in his usual charismatic manner. He engaged the guests by introducing the history of Toastmasters and later moved on to introduce the respective role players who were ready to develop their leadership skills in Toastmasters.

We then moved on to the mysterious, mind-cracking and motivating Table Topics session with the humble and elegant Serena Kong, ACB as our Table Topics Master. She popped great questions on leadership to all those who attempted at the session. Mostly all of our guests rose to the challenge to unleash the power within them to speak. 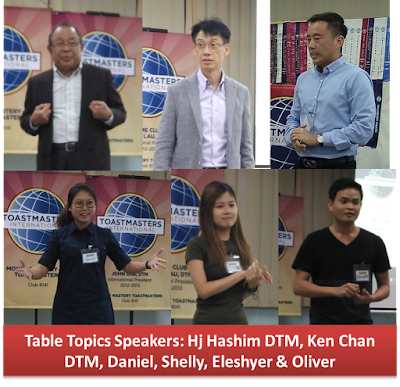 Main course was served at 8.00pm with a variety of speeches by 3 speakers for the Assigned Project Session. Today we had with us two Pathways Ice Breaker speeches and one speech from the Competent Communication manual. 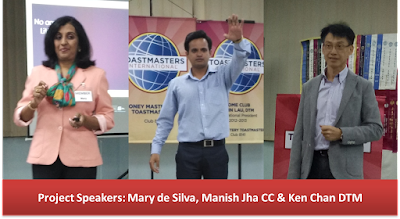 The first ice breaker was by our new member Mary de Silva with her title The Human Dynamo. She was all out to deliver her very first speech and she did it with so much poise, passion and power. Way advanced for an ice breaker, Mary used props and slides to deliver her speech and shared with us many jaw dropping facts about herself.

The second ice breaker speech was by Manish Jha, CC. Although already a Competent Communicator he revisited his ice breaker in the Pathways module and shared with us about a life changing mistake in his life. His title was MJ, The Untold Story and the story was about how he was accidentally placed 2nd in class in the 9th grade of school when he was actually 2nd last but that mistake made him unleash the potential in him to really make it to the 2nd place to maintain the mistaken title but this time for real in his next grade. Truly encouraging that where there is a will, there is a way and that anything is possible.

Alas, the final speaker who delivered the 7th speech in the Competent Communication Manual was a not-so competent speaker. Rather, he was an extremely advanced speaker. Ken Chan, DTM left the crowd with food for thought with his speech Now Everyone Can Lead. With his charismatic gestures and manner, he brought us through his speech on the types of leadership style one could adapt and also managed to smoothly slot in a slight preview of the Leadership Workshop that MMKL was to organize at the end of the month. 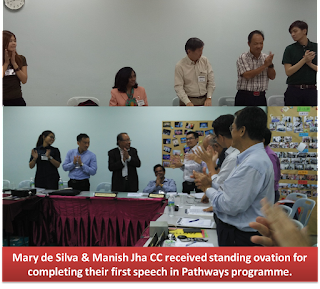 After a fulfilling session with speeches that were music to the ears and fuel to the mind, there was a short Pathways Briefing session by Dr. William Lau, DTM who is one of District 102’s Pathways Ambassador. He led us through a step by step guide on how we could log on to proceed with our Pathways Curriculum and indeed it was a helpful session for all the members to kick-start their Pathways.

A short break was given to continue to feast the mouth-watering Nasi Lemak we have at MMKL and then we continued for a greater feast which was the breakfast of Toastmasters. The evaluations session was conducted by Vincent Hoy, CC, ALB who is also a Pathway Ambassador. First up was the Table Topics evaluation by Kelvin Chong, ACB. He gave his sincere heart-felt opinion. Then the panel of project speech evaluators gave their full and honest opinions on the respective speakers. KL Loh, ATMG went full on to give a thorough evaluation for Mary. Hj. Hashim, DTM went on with his story telling evaluation for Manish’s speech and Ken Chan, DTM had the privilege to be evaluated by Dr. William Lau, DTM himself.

A brief open evaluation was given for the project speeches and the respective role players gave their reports on the speech crutches, grammar and time. Vincent, CC, ALB gave his sincere criticism and feedback that was truly a fruitful advice for the club. Indeed the biggest room in the world is the room for improvement.

It was close to 9.40pm and it was time for our President to announce the winners for the night and deliver her closing address. The best Table Topics was bagged by non-other than Ken Chan, DTM for his flamboyant delivery. Unfortunately due to time disqualifications no voting was done for the best evaluator and best project speaker. 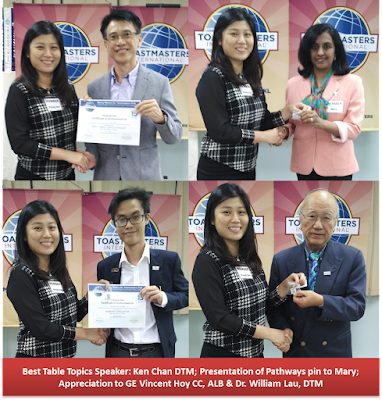 Wendy Sim, CC the President then gave her best speech and reiterated about the capabilities we all have hidden inside us. Many of the guests shared how they truly enjoyed the meeting and we even had a couple ready to sign up, eager to unleash the power within them. With that, the meeting adjourned and a cheerful group photo was taken.
It’s always a rewarding meeting at MMKL and each meeting sure allows us to unleash our power within and with that in mind dear reader I hope you find in yourself something for you to unleash.